You can read more about it here:

Hanwen School is happy to be able to offer our local community a program for parents and children ages 0-6 years old.

Curriculum is combining methodologies of 2 pedagogies of Kodály Method and Orff Schulwerk to build a playful musical environment for kids to learn musical skills through play.

On the morning of our first Open House, our architect, Tai-ran Tseng, came out to take photos of our wonderful space. He is a knowledgeable architect and has worked on some great music & dance space designs. He made sure our classrooms and music rooms would designed to be sound-proof from our activity area where kids will be running around and playing. This way, students can focus on studying when they are in the classroom and have fun playing when they are in our activity area.

Check out our photos below: Thank you for everyone who came to Hanwen School’s first Open House to learn about our after school program and summer camp. We will be starting after school language program in Fall 2017, so contact us to register and enroll your child. 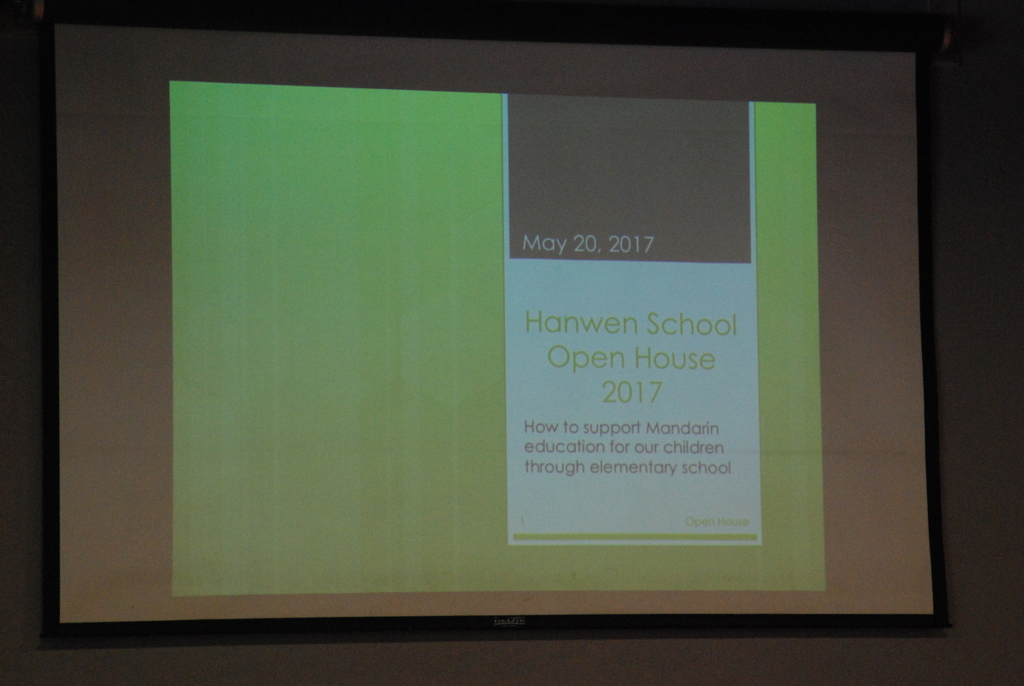 Click here to view the photos from our Open House

We had a wonderful Lion Dance from UC Berkeley’s VSA Club. They did a fantastic job bringing good luck to Hanwen School. The kids really enjoyed feeding the lion cabbage and taking photos.

Ron Chung, the founder of Hanwen School, gave a presentation about the challenges for our children learning Chinese in the US and what are some target learning goals.

Thanks to Go!Mandarin for coming out and doing a language & music activity with kids at our Open House. They will be offering a Mandarin immersion toddler & parent music class in Fall 2017.

One of the main reasons we teach Zhuyin is the large amount of quality children stories is widely available from Taiwan and Hong Kong. These children’s books typically use Traditional characters along with Zhuyin phonetics. By providing kids with interesting reading material, we can keep children interested in learning Chinese in our after school program.

Children want fun stories to read and we want to encourage them to self-read as much as they can.

Magic Treehouse is translated into Chinese

Compare the following Elephant and Piggie (Mo Willems) stories. For a child that knows zhuyin but may not have learned a vast amount of Chinese characters, they can learn to read the story by themselves. Contrast that to the Simplified Chinese version where unless you have someone helping you with words, it is hard to read independently.

Tendency to Scan Pinyin instead of Recognizing Chinese Characters

Below is an excerpt from Learning Chinese – Pinyin or Zhuyin? (source) that discusses the reasons why an English-speaker learning Chinese may be slightly impacted by their ability to read English Pinyin much faster and getting less visual practice with looking at & recognizing Chinese characters.

Apart from providing a new system of pronunciation that enables you to complete remove yourself from any influence of English pronunciation, Zhuyin also has great benefits when reading Chinese. Learners of Chinese will know this all too well – that when you look at a poster or newspaper that has both English and Chinese, your eyes are automatically drawn to the English. Naturally, this problem also occurs when reading Pinyin accompanied Chinese too, and is amplified by the Pinyin being on a separate line than the Chinese. Consider the following text:

When learning Chinese and reading this text, the reader is forced to look away from the Chinese to read the Pinyin, subsequently overlooking the Chinese:

When reading vocabulary or terminology lists, as the Pinyin is even further away from the Chinese, the effect is more pronounced:

Again, resulting in the Chinese being ignored or overlooked unless the read specifically diverts their attention to it:

Obviously the main set back up Zhuyin is that the learner must first memorise all of the characters that represent the Zhuyin alphabet. This process usually takes a couple of weeks, but as seen above, the long term benefits far outweigh this temporary setback.

A few families asked about summer camps emphasizing Chinese artistic expression. So we decided to set up a special camp session during the week of June 26-30.

Our “Calligraphy in Motion” camp will focus on Chinese calligraphy and martial arts.

In the morning, various art and craft activities will be taught by a local Chinese art teacher, Sandra Chang. Throughout the week, we want kids to have fun, but also learn to express Chinese characters in art and to learn a complete kung-fu form (a choreographed pattern of kung-fu moves).

Like our other sessions, we will communicate with children in as much Chinese as they are capable.

We are having our first Open House. We want to show everyone our space, chat with different families and share our summer camp and after-school programs.

We will have various activities for kids and information available for parents.

Hanwen School finally has a logo. Great thanks to a generous and artistic Chinese teacher Sandra Chang who has a background in graphic design. She helped create a style that evokes writing calligraphy in a fun,child-like manner. Along with the new logo, we adjusted our website to better match our new logo and the colors of our location. Our old website was something quickly put together to get information out to the community. We hope everyone likes the new logo and website re-design.

We also had the opportunity to present at the GMIS Parent Info Night about “Local Mandarin Options after Preschool” and share some information about our Hanwen School after school and summer science programs.

Our zoning and building permits were approved by the City of Berkeley last week.
Construction is ongoing and our facility will be ready mid-March 2017.

Information about our 2017 Summer Science Camp will be available later this week.
Join our mailing list to stay updated.

We are located at 1548 University Ave, between Sacramento St. and California St.

Our facility has great spaces for children to engage in fun activities while learning Mandarin Chinese.